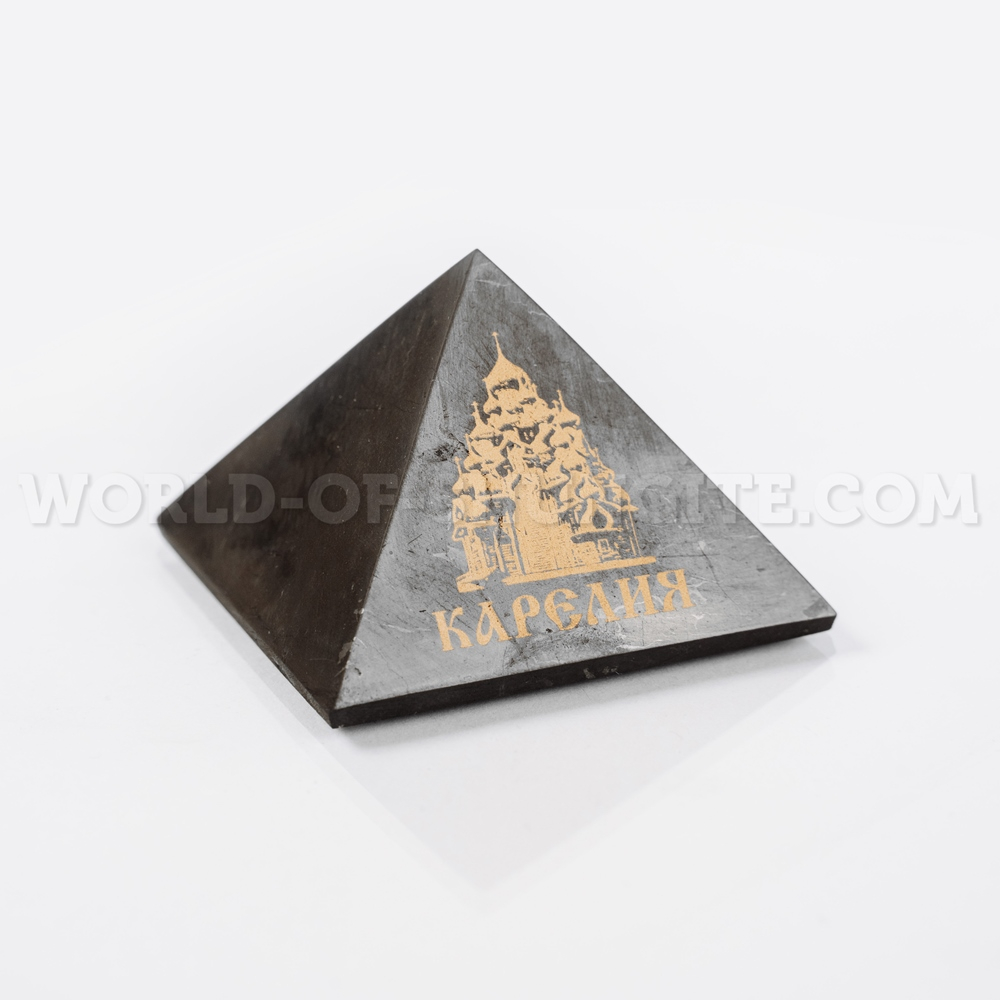 The shungite pyramid is an excellent remedy against the electromagnetic radiation and the geopathic electrical phenomena. The pyramid helps cleanse, mineralization and water purification.
The pyramid's radius of action - 2,8 meters.
The facet length of foundation - 5 cm.
The weight of pyramid - 85 gr.

Karelia, the land of the Karelian peoples, is an area in Northern Europe of historical significance for Finland, Russia, and Sweden. It is currently divided between the Russian Republic of Karelia, the Russian Leningrad Oblast, and Finland (the regions of South Karelia and North Karelia).
Karelia was bitterly fought over by the Swedes and the Novgorod Republic for a period starting in the 13th-century Swedish-Novgorodian Wars. The Treaty of N?teborg (Finnish: P?hkin?saaren rauha) in 1323 divided Karelia between the two. Viborg became the capital of the new Swedish province.
The Treaty of Nystad in 1721 between Imperial Russia and Sweden ceded most of Karelia to Russia. After Finland had been occupied by Russia in the Finnish War, parts of the ceded provinces (Old Finland) were incorporated into the Grand Duchy of Finland. In 1917, Finland became independent and the border was confirmed by the Treaty of Tartu in 1920.
Finnish partisans were involved in attempts to overthrow the Bolshevists in Russian Karelia (East Karelia) in 1918–20, such as in the failed Aunus expedition. These mainly private expeditions ended after the peace treaty of Tartu. After the end of the Russian Civil War and the establishment of the Soviet Union in 1922, the Russian part of Karelia became the Karelian Autonomous republic of the Soviet Union (ASSR) in 1923.
In 1939, the Soviet Union attacked Finland, thus starting the Winter War. The Moscow Peace Treaty of 1940 handed most of Finnish Karelia to the Soviet Union. About 400,000 people, virtually the whole population, had to be relocated within Finland. In 1941, Karelia was liberated for three years during the Continuation War of 1941 to 1944 when East Karelia was occupied by the Finns. The Winter War and the resulting Soviet expansion caused considerable bitterness in Finland, which lost its second biggest city, Viborg, its industrial heartland along the river Vuoksi, the Saimaa canal that connected central Finland to the Gulf of Finland, access to the fishing waters of Lake Ladoga, and made an eighth of her citizens refugees without chance of return.
As a consequence of the peace treaty, the Karelian ASSR was incorporated with the Karelo-Finnish SSR 1941–1956, after which it became an ASSR again. Karelia was the only Soviet republic that was "demoted" from an SSR to an ASSR within the Russian SFSR. Unlike autonomous republics, Soviet republics (in theory) had the constitutional right to secede. The possible fear of secession, as well as the Russian ethnic minority in Karelia may have resulted in its "demotion." In 1991 the Republic of Karelia was created out of the ASSR